A new lens concept and design for enhanced performance

While we are accustomed to recommending multifocal intraocular lenses (IOLs) in our practice, we recognize some important limitations that have resulted in subpar patient satisfaction in some cases, namely effects such as reduced contrast sensitivity or disturbances in night vision (Kohnen, 2020). Meanwhile, our cataract patients are increasingly younger and still active, and are interested in an IOL solution that affords greater spectacle independence. With innovations like Rayner’s RayOne EMV IOL, we are hoping that we can offer our patients the outcomes they have in mind without the drawbacks seen with standard monofocal IOLs.

Standard monofocal IOLs have limitations, most notably the loss of intermediate vision. This is important as many patients find that they require spectacles for tasks such as computer work after standard monofocal IOL implantation with emmetropic target in both eyes. A monovision target with standard monofocal IOLs may result in anisometropia that results in complaints of distance VA loss and asthenopia symptoms such as eye strain and poor depth perception. Unlike standard monofocal IOLs, RayOne EMV is designed to increase the depth of field, achieved through utilization of positive spherical aberration. With this feature, the lens can be implanted with what is referred to as an enhanced or modified monovision goal (Barrett, 2022).

Historically, high degrees of spherical aberration were found to contribute to problems with night vision and loss of contrast in low light and were common in patients with very small optical zones who underwent laser surgery in the 1980s and 1990s.

In the process of investigating better laser profiles for their patients, Professor Dan Reinstein and others found that some degree of spherical aberration was therapeutic, providing an increased depth of field with no night vision disturbances. With this sub-clinical degree of spherical aberration, the near vision of the dominant eye is significantly better than that achieved with a standard monofocal lens set to Plano sphere, and the distance vision of the non-dominant eye set to -1.5 D is also significantly better than that seen with a standard monofocal in the same set-up. The target for the non-dominant eye is consistent with an offset my colleagues and I have already used successfully in the setting of laser vision correction. Because therapeutic levels of spherical aberration allow for edge detection, both eyes can work in synergy to process a wider range of vision. In our experience, the addition of spherical aberration to presbyopia correction with a monovision goal increases patient satisfaction to 98%.

While our current experience with RayOne EMV is still early, we have been using this IOL with this modified monovision setup and have been pleased with results so far.

The creation of a precise capsulorhexis is important in all cataract surgeries to ensure lens stability. We consistently use a standard keratome blade width of 2.8 mm, and RayOne EMV arrives with a preloaded injector with a 1.65 mm nozzle diameter, so our typical incision size is appropriate for this device. In our experience so far, the injector has been very easy to use with a short learning curve, as there are only two distinct steps in the injection process. The RayOne injector is fully preloaded and it is not necessary to manually load the lens into the cartridge or to load the cartridge with the lens into the injector. Finally, the single-handed plunger design of the RayOne injector leaves the other hand free for irrigation or the delivery of a viscoelastic agent.

We are encouraged by the potential advantages of the fully pre-loaded RayOne EMV IOL but continue to utilize a strategy of underpromising when setting patient expectations with the hope of overdelivering to achieve better outcomes. With the ability of this and other extended depth of focus (EDOF) IOLs to deliver better intermediate vision and an acceptable amount of near vision, we are confident that these innovative options will progressively replace the market for standard monofocal IOLs, especially as we treat more patients with higher expectations for their visual outcomes. It is important to note that RayOne EMV is relatively forgiving and we do consider its use in cases of controlled ocular comorbidities. RayOne EMV can be used regardless of pupil size. The non-diffractive property of RayOne EMV also suggests in our view that this may be used in patients with macular pathology.

A new direction for presbyopia correction

Presbyopia is a physiological loss of accommodation over time that results in the inability to focus at near distance. As most ophthalmologists and surgeons have realized through their daily practice, long-term presbyopia is no longer an option for patients who frequently use screens and hope to maintain an active lifestyle. Presbyopia can have a considerable impact on quality of life. A systematic literature review found that patients with presbyopia reported up to 22% decrease in quality of life (QOL) scores, and up to 80% of those with uncorrected presbyopia had difficulty performing near-vision tasks (Berdahl, 2020). Uncorrected presbyopia is associated with an estimated productivity loss of 25.367 billion USD if populations of ages 65 years and younger are considered productive. If presbyopia correction worldwide was achieved at the rate seen in Europe, this potential productivity burden could be reduced to 1.390 billion USD (Frick, 2015).

Intraocular lens-based presbyopia correction can be achieved with monofocal, multifocal, or EDOF IOLs, all of which have potential advantages and drawbacks. Standard monofocal IOLs can result in a loss of depth of focus and suboptimal intermediate and near vision. While diffractive multifocal IOLs are often considered to avoid these issues, they can result in loss of contrast sensitivity as well as disturbing optical phenomena such as glare and halos that impact night vision. Traditional EDOF IOLs provide a wider range of vision, including functional near vision, but dysphotopsia is still possible depending on the EDOF lens technology. For instance, traditional EDOF lenses with diffractive surfaces are more likely to result in glare, halos, or loss of contrast sensitivity. The technology of new EDOF lenses has now expanded to include zonal refractive design, diffractive hybrid-based lenses, anterior surface modification of the central optic zone, small aperture design, bioanalogics, or a combination of these features (Kohnen, 2020).

To provide an attractive option for lens-based presbyopia correction, the new generation of mono-EDOF lens technology has emerged aiming to provide a superior range of vision, including improved intermediate vision, while limiting unwanted photic phenomena. To achieve these goals, new optic technology aims to achieve not a single focal point but a focal zone that does not split the light but rather stretches, creating an elongated zone of focus.

In the case of RayOne EMV, the lens is designed with a patented non-diffractive optic profile that induces controlled positive spherical aberration in the centre of the optic and gradually reducing towards the periphery. This results in minimal loss of focus over a wide range of distance and due to its diffractive-free design, minimal dysphotopsia. The wide range of functional vision achieved with spherical aberration also allows for a better range of refractive error tolerance. Finally, RayOne EMV and other mono-EDOF IOLs allow for more rapid neural adaptation that is likely to result in higher rates of patient satisfaction.

As shown in Table 1, even with no offset, RayOne EMV can provide approximately 1.25 D of depth of focus, resulting in relatively good intermediate vision. Meanwhile, with the suggested offset of 1.0 D, approximately 2.25 D of extended vision can be achieved. This provides adequate focus at 40 to 50 cm, which is an excellent outcome when considering frequent screen use. Reduced pupil dependency and reduced sensitivity to decentration and tilt are additional important features of RayOne EMV. Even if the surgeon chooses a target of bilateral emmetropia, a depth of focus of approximately 1.25 D can be achieved.

The RayOne EMV defocus curve in Figure 1 demonstrates that with even at -2.0 D defocus (~ 50 cm), patients achieve a visual acuity (VA) of 0.2 to 0.3 logMAR, which is important as 0.3 logMAR is a common cutoff point for driving purposes in many countries.

In our initial experience, 100% of our patients who received RayOne EMV achieved 6/9 or better vision outcomes, and 83% achieve outcomes of 6/6 or better. Of note, the uncorrected intermediate VA recorded at a distance of 70cm was N8 or better in 100% of patients, which was particularly impactful. None of our patients have reported dysphotopsia, and 100% were extremely satisfied with their outcomes. The modular transmission function (MTF) curve in Figure 2 shows that RayOne EMV IOLs achieve a light transmission curve consistent with other monofocal IOLs. Overall, RayOne EMV and other mono-EDOF IOLs effectively fill the gap between the spectacle dependence still required with monofocal IOLs and the spectacle independence with the possibility of dysphotopsia with diffractive multifocal IOLs (Figure 3).

As we continue to evaluate these new refractive surgery options for our patients with presbyopia, we are ideally looking for IOLs that consistently provide a good quantity of vision in terms of depth of focus, quality of vision in terms of good contrast without dysphotopsia, minimal dependence on spectacles or contact lenses, and stable outcomes over time with low rates of late effects such as posterior capsular opacification (PCO). Finally, we are always keeping cost-effectiveness in mind when considering treatment options with our patients. With the introduction of RayOne EMV, we are closer than ever to effectively achieving these goals for many of our patients. 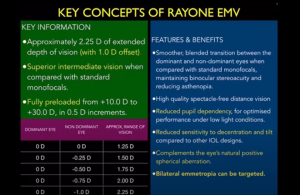 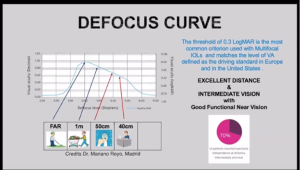 Figure 3. IOL options based on degree of spectacle independence. 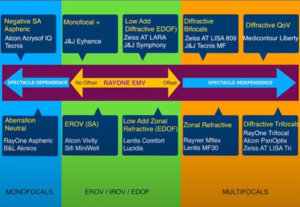